Thanks are due to Chris Grogan for putting together the fixtures for 2021, which you can find in the menu above.

Another sunny day @ Whitchurch CC but bl**ding cold in the shade!!

Regals - a team who we have never beaten - won the toss and chose to bat, sportingly opening with younger members of their squad. Excellent bowling from Jonny G(3 fer) Riyas, Francis, Tom and Lynn saw oppo reduced to 60 odd for 5 wickets with good catches from Dave, Sid, Francis and a “first class” slip catch from Scooby. Regals rallied with some big hitting from middle order batsmen Billy and “Inty” and managed to get to a respectable 175-7 off their 35 overs.

Whitchurch got off to a solid start with Jon S and Woody. After Jon and Scooby perished to a low ball and a good catch - the Chapman brothers showed what talent exists in the family. Woody put on another masterclass of “hitting the bad ball” and smashed a superb 112 n.o. ably supported by Tom C with a perfect supporting 34 n.o to see Whitchurch cruise to a comfortable win in 25 overs. A great team performance and shows how far the team has progressed over the summer.

Really good sporting opposition with many staying for a beer and v.keen to play us next year. A great penultimate game where the team again showed what a really good cricket team we are and the fantastic team spirit of the  summer just kept on going....... well done team! 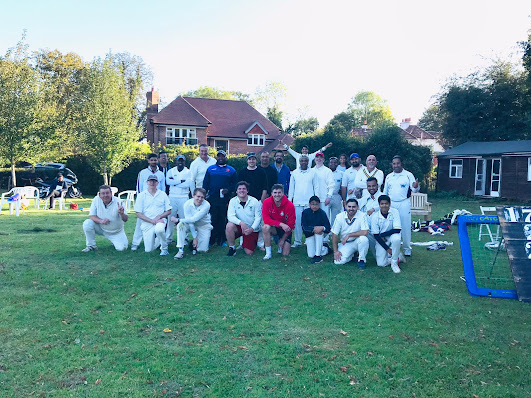 A Beautiful day at Whitchurch CC 25
Degrees and full sun!
Whitchurch batted first on a slow wicket and very dry wicket that had been used twice before and after a solid opening stand with Jon and Grogie, Woody came in and blew away the Cholsey attack with a magnificent 114 no ably supported by powerful cameos from Tom (my head hurts Chappers) 29 and Scooby 31 no. WCC finished on 238 for 5 off 40 overs
Coldest reply was permeated by the regular loss of wickets and at one stage it looked we would bowl them out for 130 but they steadied and a strong 91 by Warren Ainsworth got them close  - squeeky bum time again! But once he holed out off Grogie - (magnificent high catch by Jonny G) their batters could not keep up with the run rate with them finally falling short by 15 runs. Good bowling and fielding by all and well done Nick H, Francis, jonny G( who took a 3 fer) and Tommo.
Good performance today boyz - a good unit!
Grogie
No comments:

Wow 😯 what a game today - 25 degrees and full sun and weren't we entertained!!!!
WCC won the toss and batted, and after the loss of 3 early wickets WCC consolidated and a fab elegant anchor role by Sid who got 98 who shared a 130-ish partnership with Nick Hill who got 42. When Nick fell, Tom Chappers came in and treated us to some fab extra cover drives and shots through mid wicket- WCC ended with 248 for 9 off their 40 overs.
Peppard and Stoke Row's reply was measured and they bided their time keeping wickets in the bank; however they were always behind the required run rate - WCC bowled fantastically well - well done Lyn, Tom Francis, Jonny G, Corm’s, Nick H. We had them needing over 20 from 8 balls but their Berks U17 player saw them home with some powerful hitting with 2 balls to spare, hitting an inside out 6 over cover.
What a close great game - all 3 outcomes were in play in the last 20 mins of the game -it was squeaky bum time. I've played at WCC for nearly 30 years and don’t think I’ve seen 248 chased down at Home!! Nice beers afterwards with a great and strong opposition and we look forward to playing them at theirs next year.
Really good performance today gents. The oppo had a really good team out a mixture of 1st and 2nd, and we’re we’re more than a match for them. On another day we would have closed this out.
Tom was injured taking a high catch which hit him in the face - he is feeling better and hope he’s we’ll enough to play next week! Cheers all and well done - hugely enjoyable day.
Grogie
No comments:

A sunny 19 C day presented itself as well as a square full of worm casts an hr before the start which Jon Steward quickly sorted and produced a good wicket which the oppo who elected to bat could not take full advantage of due to great bowling by Francis, Riyas, Tom, Jonny and Lyn supported by 2 quality catches by Lyn on the boundary and Jonny G at extra cover- we bowled the oppo out for 149 in 37 overs. Fun highlight was Tom's collision with Lyn in the field in his quest to get the dirtiest whites!

Whitchurch’s reply was solid - after losing 2 early wickets , an unfortunate run out of Jon and Scooby getting bowled by one that nibbled on him on the drive, Sid and Woody put on a 60+ partnership and when woody holed out for a powerful 39 and Nick Leadbeater came in to see the team home inside the 23rd over with Whitchurch winning by 7 wickets. Sid finished with an elegant 62 .Couple of nice beers at the ground after with the really nice oppo. We were really good in the field today boys - thoroughly professional performance

It was one of those days when everything went right for wcc in the field after they won the toss and elected to field. Good bowling by Jonny G , Francis, Riyas, Ronnie, Cormac and Jon lead to a steady clatter of wickets supported by good fielding ( Nick Hill took a great catch on the boundary but then dropped a dolly!). As I said pretty much everything went right and their 2 first teamer batsmen we got out really cheaply and bowled them out for 74

WCC reply was permeated by some antics by Andy M who opened and conspired to fall on this bat when going for a quick second run injuring himself in the process and retiring 😢 hurt. Don’t worry Andy you can open next week!!

After brief cameos from Nick 0 and Jon 1 - woody came out and with some lusty blows executed the coup de grace on the Crowthorne attack which was weak aided by the surviving opener Tom. So an 8 wicket win with plenty of time to spare.

Fun Highlight of the day was Tom pushing the sight screen - feet slipped and he fell flat on his face!!! -nice oppo who had a bad day - previously we have had some close games with them - this definitely wasn’t!

Cheers all enjoy the bank holiday.

A pleasant 20 degree day greeted our ex Whitchurch players the exiles. Whitchurch batted first and a fine 56 by Jimbo Shananigans, Wcc’s opener in his first game of the season got us off to a good start. He was supported by Nick Hill who got 71 and Sid 44 who once Jimbo got out stepped on the gas to get us to 223 from our 35 overs- special mention to oppo bowler Robbie Povey who bowled some of the best leg spin and googlies I’ve ever see in club cricket.

Exiles in their reply lost an early wicket with Mike Scanlon getting a good ball from Frankie. Exiles consolidated with Nick Leadbeater and Neil Houldey but Whitchurch’s middle overs were tight forcing exiles into taking more risks to up the run rate. Sid took a great catch and Nick L went onto get 92 - enter R Povey who’s quick fire 51 meant that the final 2 overs were close - squeaky bum time! However, Exiles fell 10 runs short with Whitchurch retaining the Anna Scanlon cup which was presented to Whitchurch by the exiles captain Robin Cotgreave after the game. We had a great BBQ and drinks after and thanks to Mike Scanlon for providing the food.

We look forward to seeing our friends The Exiles again next season.