A beautiful spring day with full sun and an ambient temperature of 16 Degrees presented itself for the first game of the season after along winter and Covid lockdown.

Whitchurch batted first on a good hard wicket and amassed 260 with both Nick Hill and Woody scoring powerful tons - with all those runs on the board the batters coming in later had fun playing without any caution and a few wickets fell when they had a go in the final few overs.

Peppard and Stoke rows reply never really got going - they lost a wicket in the second over and the only resistance came from Mark their captain who scored a powerful 55. There was a regular clatter of wickets and it became clear after about 15 overs they were struggling with the Whitchurch attack .Tommo bowled very quickly today as did Francis and they were ably supported by Jonny G, Grogie Riyas and Anand. The wickets were shared around, and so happy Sid’s shoulder has got better, and he was able to bowl and took a cheeky wicket with a quicker ball ! 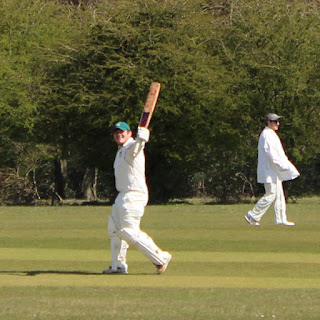 A nice beer was shared with the oppo in the Cherry Tree beer garden in Stoke Row - they were a nice bunch of boys.
A great performance today great to get off to a good start at a nice cricket ground with a well-manicured square and it was so great to get out!