Widespread showers were forecast, and it was chilly for the first 10 overs of Highmoor’s innings who won the toss and chose to bat on a slightly damp wicket -the sun soon came out though and it stayed that way the rest of the afternoon. 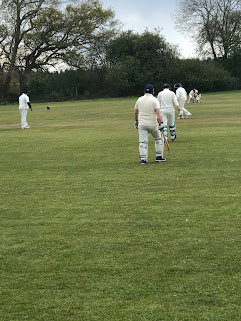 Highmoor batted well but Whitchurch-on-Thames’ bowling and fielding was good, and we managed to keep them down to 204/7 off their 35 overs. Nick H, Cormac ,Tommo and Francis deserve special mention for good bowling performances and Jonny G took 2 good catches - special mention also goes to Tommo for throwing himself around in the field and getting 2 injuries ( getting to be a habit this Tommo) - oh I forget to mention Nick Hills catch off a no ball ( don’t worry Nick it’s coming!)
Nick L and Jon S got WCC off to a steady start. But as they accelerated their wickets fell (lovely drive through mid-wicket from Nick L and good hitting from Jon though before they got out) . Bring onto the scene Woody and Sid and this is where it got interesting as powerful blows from Woody (96 no) and elegant stroke play from Sid (42) got us close but after Sid got run out trying to accelerate we were left needing 7 from the final over and with their opening bowler back on and Woody off strike it proved not to be with WCC falling 3 runs short
This was a really competitive game with the oppo fielding at least 8 league players against us and we did great taking the chase to the last over where all 3 results were possible - 2 talking points of the day was the altercation with the oppo captain when a caught behind was not given and the handled the ball dismissal of one of Highmoor’s batters was retracted “in the spirit of Sunday cricket”

Nice beer was had in the Rising Sun in Highmoor afterwards where the oppo were reminded by Corm of Whitchurch’s’ good grace in retracting the handled the ball dismissal!