WCC fall short in drizzle and darkness away at Farley Hill

Viking, North Utsire, South Utsire, Forties German Bight, Dogger - yes that was saddo Grogie’s week looking at the weather forecast hoping that we were not going to miss 2 weeks in a row due to the weather! The weak ridge of high pressure that built on Saturday slowed the advance of the weather fronts ensuring that only the last half an hr of the game was played in a drizzle- and much of the rest of the day was dry albeit 12 degrees!

Meteo lesson over - So we won the toss and fielded, and the Farley Hill top order initially struggled on what was quite a good hard pitch bearing in mind what the weather had been like over the last 2 weeks - the covers did their job! - We took a couple of quick wickets - the highlight was Malik’s direct runout from 20 yards away with only one stump to aim at. We bowled and fielded okay but the Farley hill middle order was v strong- their no 4 came in and held the bat the wrong way round ( he was a right-hand bat but had his left hand under his right) and smashed the ball around the park off all the WCC bowlers - some brilliant very big 6's were hit. The Farley Hill total ended on 273 for 5 off 35 overs. 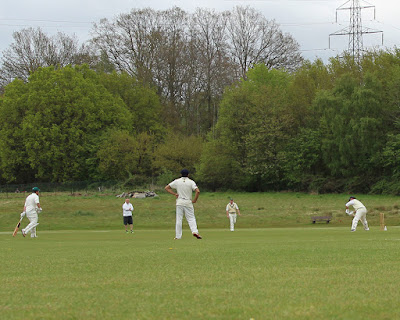 So, a big total faced by the WCC top order who rose to the task in hand. Nick Hill played beautifully for his 57 as did Annand for his 67. Sid, Francis, and Jonny G chipped in with some big hitting scoring 35, 26 and 38 respectively ( this was Jonny’s highest score ever well done!) We had the oppo worried in the last 6 -7 overs or so ( all fielders on the boundary) as their league bowlers were going at 10+ per over and if we could keep that up, we would win, but alas a clatter of wickets meant the hitting impetus was gone and we fell 16 runs short in the drizzle and fading light.

This was a particularly good performance for 3 reasons:

1.       We kept going and our heads did not drop when we were fielding, and they were smashing our attack around the park.

2.       Our batting was great, and we really brutalised their attack ( just like they did to ours).

3.       The oppo was made up completely of league players (6 first teamers and 5 second teamers) - we did really well and just goes to show how good a side we are.

So, the weather will be better by mid-week - we have high pressure building for a sunny weekend next weekend. We have our first home game and drinking boat race v Jack Frost.